Jacob Ross is research fellow in DGAP’s Alfred von Oppenheim Center for the Future of Europe where he focuses on Franco-German relations. He had initially joined the program as a research assistant in June 2021. Previously, he worked as a research assistant at the NATO Parliamentary Assembly in Brussels. He had already gained experience within the Franco-German context while working at the French Ministry of Foreign Affairs and during his work as a parliamentary assistant to Sabine Thillaye, Chair of the European Affairs Committee of the French National Assembly.

Ross also received the majority of his academic training in France: first, within a Franco-German double-degree program at the Institute of Political Science (IEP) in Lille and, later, at the IEP in Paris and at the Ecole nationale d'administration (Ena) in Strasbourg. He also studied at the Johns Hopkins University’s School of Advanced International Studies (SAIS) in Bologna while earning a master’s degree in international relations and economics. 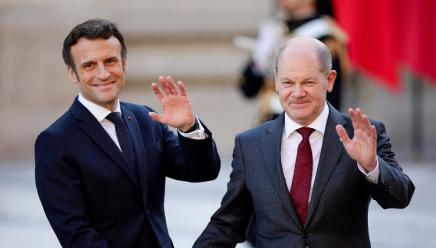 A New Foundation for Franco-German Friendship

On January 22, 1963, the Franco-German Treaty of Friendship was signed in the Élysée Palace. Over the intervening six decades, a united EU has also been built on this foundation. But it is now in urgent need of renewal.