Tim Rühlig has worked as a research fellow with DGAP’s Technology and Global Affairs Program since September 2021. He investigates the growth of China’s power as the country’s footprint in digital technology increases. He will continue the research on technical standardization, wireless infrastructure, and the digitalization of seaports that he conducted in his previous position with the Swedish Institute of International Affairs from 2018 to 2021. Rühlig also coordinates the working group on high technology and innovation of the “China in Europe Research Network” (CHERN), an EU Cost Action.

Rühlig’s book China’s Foreign Policy Contradictions will be published by Oxford University Press in December 2021. His writing has appeared in China Perspectives, Development & Change, and China Review, among other publications. In 2018, he was the rotating chair of the European Think-Tank Network on China (ETNC).

Rühlig received his PhD from Frankfurt University with a thesis on sovereign state control in China’s foreign policy. He studied international relations and peace and conflict research at Frankfurt University and the Technical University of Darmstadt, as well as political science and cultural anthropology at Tübingen University.

A Sovereign Europe ... and China 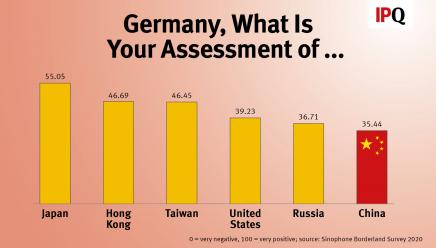 Germans, by their own admission, don’t know that much about China, but their skepticism is high and rising. Beijing has failed to significantly profit from the alienation of the German population from Trump-led America.