Germany is facing a perfect geopolitical storm. It needs to respond by further strengthening multilateralism, building up European sovereignty as well as solidarity, and reviving the transatlantic alliance with a new US administration.

Thirty years ago, reunification and the end of the Cold War raised high hopes among Germans that the global triumph of liberal democracy and the capitalist system was now inevitable. It felt like springtime after a long winter. But the euphoria of those days has faded. The brief unipolar moment with the United States as the unchallenged superpower has passed. And with today’s global disorder and the resurgence of authoritarianism it feels more like autumn has arrived on Europe’s doorstep bringing with it a perfect geopolitical storm—for which we must brace ourselves.

The US withdrawal from multilateral institutions, which it had played a central role in creating, has accelerated the erosion of the international rules-based system. US President Donald Trump was a catalyst for this development. But the US retreat from Europe and the Middle East had already started before 2016 and will continue—no matter who wins the election on November 3. And the transatlantic relationship is set to spiral even further downward as the US expands its use of coercive economic measures not only against its foes around the world but also against its friends in Europe.

With this chilly breeze from the Atlantic at our back, a look to the east and to the south reveals the main geopolitical challenges ahead: Russia has filled parts of the vacuum created by the US withdrawal and is threatening our European security with an aggressive foreign policy. China has also taken advantage of the geopolitical void and, following its unparalleled economic expansion, is now self-confidently asserting its national interests across the globe and fueling great power competition. In addition, both Russia and China are spearheading the global resurgence of authoritarianism.

Moreover, while Germany is surrounded by a ring of friends, Europe is encircled by a belt of instability, terrorism, and conflicts—ranging from Ukraine and the South Caucasus through Syria and Iraq to the Sahel. And to make things worse in this region, the climate crisis will work as a dangerous risk multiplier. Clearly the forecast is grim but we can weather the storm—here is how:

Strengthening multilateralism: One of the key tasks for German foreign policy is strengthening the rules-based international order. As an export champion, we rely heavily on international trade and the respect of global rules. And only through international cooperation can we solve the great challenges of our times like climate change. Therefore, the initiative launched by German Foreign Minister Heiko Maas to form an alliance for multilateralism has come at just the right moment. Now, we not only have to defend existing multilateral structures but reform them. Together with like-minded nations we need to fill part of the vacuum left by the US withdrawal and create new beacons of hope in multilateral cooperation. We should, for example, turn today’s crisis into an opportunity and strengthen our support for the World Health Organization’s COVID-19 pandemic management and reform the multilateral health architecture.

Enhancing European sovereignty: For Germany, a medium-sized country at the center of Europe, we can only make our voice heard on the global stage if we act in concert with our neighbors. And the increasing great power conflict makes it imperative for us to enhance European sovereignty. Therefore, we need to construct the tools enabling us to defend our values and interests—be it together with our allies and partners or, if necessary, on our own.

We need to take on more responsibility in our neighborhood, especially in parts of the Middle East, Africa, and the post-Soviet space, as we have already shown with the Minsk Agreement, the Berlin Conference on Libya as well as the EU “Irini” mission in support of an arms embargo for that war-torn country, and our engagement in the Sahel. While we always prioritize diplomacy, we also need to enhance the EU's military capabilities, including core competencies in the defense industry.

The EU needs to ensure that, even when there is disagreement among member states, we have the ability to act swiftly on foreign policy issues. The recent case of Cyprus vetoing sanctions against the brutal dictatorship in Belarus for several weeks damaged our international credibility. To avoid such blockades, we should work toward a more coherent strategic culture among member states—a goal which we will move closer to through the Strategic Compass process. We also have to push harder for the creation of a European Security Council and a change from unanimous decision-making to a qualified-majority system.

We have to create effective instruments to defend the EU against economic coercion from great powers. We have to reduce potentially harmful asymmetries in the economic and technical sphere. And we should enhance the global role of the euro and deepen the euro-denominated bond market. Moreover, we should leave no doubt that we will respond to extraterritorial sanctions harming European citizens and companies with reciprocal measures, including personal sanctions.

Increasing solidarity within Europe: We are only as strong externally as we are united internally. Therefore, we need to further strengthen internal European solidarity by growing even closer together. It was shocking to see unilateral border closures within the Schengen area and export stops for medical equipment in the early days of the pandemic. But after this short flare-up of national impulses, Germany has shown true European solidarity, from treating foreign patients to initiating the historic recovery plan. We must continue this.

A World Safe for Democracy

Defending liberal democracy, at home and abroad: The promotion of democracy, the rule of law, and human rights have always been guiding principles of German foreign policy. Confronted with a resurgence of authoritarianism, defending the liberal democratic system has to return to the center of our global engagement. But, before looking outward, we first have to repair our European house, as even a small crack in the foundation can bring down a whole building if overlooked for too long. We should therefore ensure that EU funding is linked to rule-of-law compliance.

Our century will be shaped by the competition between autocratic systems and liberal democracies. While Russia is already a constant threat to our security as it has repeatedly shown—from the annexation of Crimea to its use of deadly, outlawed chemical weapons—a further geopolitical challenge comes from the Far East. For too long, we did not realize how fundamental a challenge China represents as our view was clouded by economic interests. Now, as we clearly understand that China is not only a partner and a competitor but also a systemic rival, we need to develop a common policy of critical engagement in concert with our European partners. And we have to make it clear that we stand in solidarity with other liberal democracies and span a global network to defend each other against encroachments on our freedom by authoritarian powers.

Reviving the transatlantic alliance: German foreign policy is deeply rooted in our transatlantic alliance of values and security. As four years of Donald Trump have caused great damage to Western cohesion, hopes are high that from January 2021 onward a new US president, Joe Biden, will restore unity and thereby bring back strength to our alliance. But, come rain or shine, with our overlapping views and shared interests toward Beijing, we should come up with a bold proposal for the US government to closely align our China policies and revive our transatlantic alliance.

Read more by the author

Op-Ed: The Case for a Sovereign Europe

The EU needs to improve its capacity to act. The new German government is ready to play its part, says the SPD's foreign affairs spokesperson. 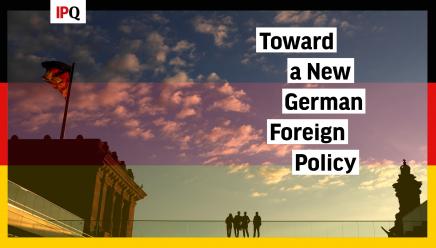 Germany needs to improve its capacity to act in the realm of foreign and security policy. This includes reaching the NATO 2-percent goal more quickly. There are also structural changes required, including the setting up of a National Security Council.