Dr. Benjamin Tallis joined DGAP in September 2022. He is a research fellow and runs the project  “Action Group Zeitenwende.“ He previously worked for the EU on security missions in Ukraine and the Balkans and was policy officer at the European Centre of Excellence for Civilian Crisis Management in Berlin.

Tallis spent five years at the Institute of International Relations Prague where he headed the Centre for European Security, advised numerous European governments, edited the journal New Perspectives, and created the 2017 Prague Insecurity Conference. He worked at the Hertie School in Berlin and the Institute for Peace Research and Security Policy at the University of Hamburg (IFSH). At the latter, he advised the German government on the future of European security and curated the 2019 Hamburg Insecurity Sessions. He contributed to the drafting of the 2016 EU Global Strategy and advised on visa liberalization for Ukraine in 2017.

Tallis holds a doctorate from the University of Manchester, regularly appears in the media, and has been published in Foreign Policy, Politico, The Independent, and in leading academic journals including International Studies Quarterly, Security Dialogue, and Cooperation and Conflict. His book Identities, Borderscapes, Orders: (In)Security, (Im)Mobility, and Crisis in the Enlarged EU and its Eastern Neighborhood will be published by Springer in 2023. 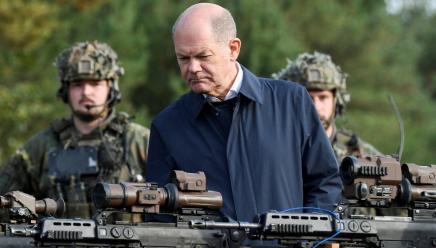 Instead of introvertedly focusing on defense, internationalizing and socializing their country’s transformation will give Germans the best options for action—and drive lasting change, which they must own.